Case of the Curious Alarm 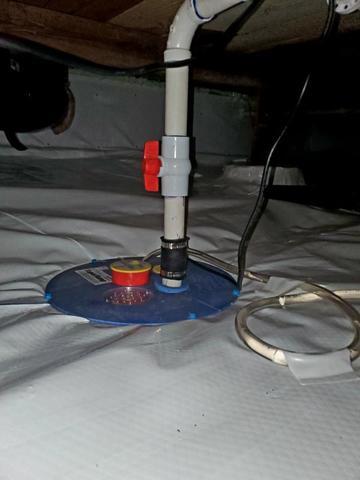 ALARM SYSTEM FOR ANY WATER ISSUES

The family had prepared for this day for almost two weeks now. Their son was coming to visit with his family for the weekend. It had been some time since they had been able to get together. After warm regards, a great dinner and some much needed family time, the group headed to the dining room to catch up on lives events.

Over the chatter and happy banter the son heard the faintest of beeping noises. Similar to that of a car alarm in the distance. At first he brushed off the sound believing it to in fact be a car alarm of a distant neighbor. After an hour though, the noise persisted. Being slightly hard of hearing, our home owner was unable to hear the sound the son was insistent on. A search though the house led them to the crawlspace access in the finished basement. From this doorway the alarming was very audible to the whole family and the decision was made to investigate the crawlspace for the source.

Fortunately John's Waterproofing had been there two years prior to encapsulate the crawlspace making for a bright and clean space in which to crawl. Peering into the crawlspace everything looked as it should have, yet the alarm persisted. At this point our homeowner just assumed our alarm was malfunction. He and his son climbed into the crawlspace to shut the alarm off only to find that the top of the sump pump was in fact full of water which had caused the alarm to activate. Still they could not locate the source. Until they heard the distinct sound of water droplets hitting plastic. Tracking the sound they discovered one of the old galvanized pipes running along the ceiling was rusting and beginning to leak causing the water to roll to the low point and enter the sump pump.

When the plumber arrived he informed our homeowner that without the alarm they never would have know about the leak until the pipe burst. Had that pipe have burst it would have flooded the lower portion of their home and destroyed the electric running through the walls to upstairs.

Talk about an unexpected benefit of a sump pump alarm!

Back to Previous Page
Back to News & Events